On the 11th of December (Sunday), three friends of mine and I were invited to a day-long tour of the Hamaoka nuclear reactor owned by Chubu Electric Company.

We had been invited to look at the upgrades made to the facility in light of the Fukushima nuclear disaster. These changes included installation on five new generators, a wall to protect against tsunamis , and the elevation of several critical pieces of equipments and facilities, and generator-trucks along with fire-engines.

With reactors 1 and 2 slated for decommissioning and reactors 3, 4 and 5 slated for restarting, these preparations are being carried out with the utmost care. We went inside the reactors 3 and 4, and immediately we noticed the extensive reinforcement to the buildings. I noticed the structures that had been added on to aid complex repairs. We traipsed up and then down again along very narrow stairways, with various pipes running along the walls and then off in different directions. It was all extremely complex. While gazing down at the pool that held the spent fuel rods, I asked them for an explanation as to why a similar cooling pool at the Fukushima Daini Plant had lost a significant amount of water during a low activity seismic event.

Having seen for myself the intricate maze created by the criss-crossing pipes, wiring and equipment, I could not but help think of what would happen in less-than optimal situations, like when there are power cuts, earthquakes, fires, tsunamis, thunderstorms, cyclones, or even when it is dark outside. I wonder how the people tasked with maintaining this behemoth would be able to work in cooperation with each other on this complex yet delicate machinery. My intuition keeps me pessimistic.

Human beings have always sought to create megastructures to astound people, and more importantly, to establish authority to govern. The Pyramids of Egypt, the Great Wall of China, the temple at Todaiji housing the immense bronze statue of Buddha, the Versailles Palace, the Forbidden City all bear testament to this idea. But the nuclear reactor may be a different thing altogether. It is a megastructure, but also has complex and intricate innards. The awe and sheer scale stuns and astounds. And the inevitable question comes to mind: can we humans control and safely harness this power? I shared these thoughts on my Facebook post. Will we be able to maintain control over the Promethean creation that we are unleashing?

On the 13th (Tuesday), I spent a day in Kimitsu City, Chiba Prefecture, with The UAE ambassador to Japan His Excellency Mr. Khaled Omran Sqait Alameri and his entourage touring the Nippon Steel Sumitomo Metal Company (NSSMC) Works and TEPCO Power Plant. These were both megastructures as well.

Interesting fact: Ambassador Alameri studied as an undergraduate, electrical engineering at Tokai University’s School of Engineering during the time that I was dean of the School of Medicine there. It’s nice to be connected in such a way! 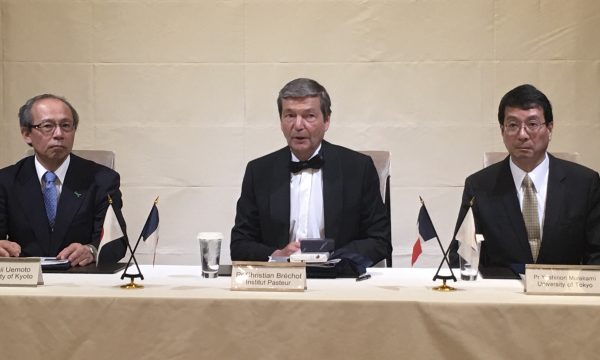 These days, I have been lucky to be invited to attend several unique parties, receptions and dinners. Barring a few, most were public events, and some were organized by embassies.

Just to give you a general idea, I attended the following events:

Birdlife International’s annual fundraising gala, (the honorary president, Princess Takamado, was unable to attend owing to the mourning for Prince Mikasa’s passing), the commemoration of the creation of the Pasteur Japan Foundation through the collaboration of Institut Pasteur, Tokyo University and Kyoto University, The official unveiling ceremony of the Intilaq Tohoku Innovation Center (in Japanese) by the Qatar Friendship Fund, The Norwegian embassy’s reception for the visit of Norway’s foreign minister, and other events organized by the French embassy, the Swiss embassy, the Dutch embassy, and the British embassy.

At one embassy, I was invited to a small lunch that would be attended by ‘around 10 people’. Turned out that I was the only Japanese invitee, the rest being Minister and the entourage of 5, and the ambassador and his  staff. After some small talk, the conversation turned to the current situation in Fukushima after the nuclear disaster, as the Minister sought to learn more. Ever since I headed the NAIIC, I have found myself in similar situations more than few times.

Indeed, I recall that I was once specifically asked for by a visiting foreign dignitary, who was tired of receiving incomprehensible and non-committal replies when he had asked government officials and representatives of Japan about the kind of response Japan was planning in the aftermath of the Fukushima Daiichi Nuclear Disaster. Even taking into account the fact that there may be some errors arising due to translation, the policies of the Japanese government post-Fukushima requires some truly mind-bending and convoluted logic. It is really difficult to explain it in simple terms, probably because there is dissonance between the observations and conclusions. No wonder the hapless government officials were unable to provide reasonable answers. It is disturbing that, although the Fukushima Daiichi disaster ranks right up there as one of the worst nuclear disasters the world has seen, the response cannot be explained to a global audience.

I have written extensively about this worrying issue in the book ‘Regulatory Capture’ (in Japanese), released in March this year. It is not a trifling matter; for it deals with the trust that lies at the heart of national governance.

In the aftermath of the Great East Japan Earthquake, Masayoshi Son laid out a new energy plan for the future, setting up a foundation to conduct research into renewables, and at the same time expanding the boundaries of his corporation to the global scale.

It is hard to find anyone in business circles in Japan, and indeed in the world, who are as capable of generating a buzz and garnering interest as Mr. Son. It is easy to criticize and be a naysayer, but I wonder how those same critics will fare in the face of similarly fierce put-downs.

Son-san has not taken long in acting to make his new energy plan, a response to the Fukushima Daichi Nuclear Accident, a reality.

On 9th September, I was invited to take part in a panel discussion as part of a conference organized by his foundation. You can view the panel discussion through this link to the foundation’s website, as well as comment or ask questions.

The speeches of Kåberger, Dr. Lovins (at around 14 min) and Son (at around 43 min, as well as from the beginning in the second video) were all wonderful, inspring and informative. I was particularly impressed by the comprehensiveness of Son’s vision, his thoughts and views, and his ability to translate thought into action, as well as the structure of his talk. His answers to questions were also very good.

If you see his video, you will be able to understand the precarious position that Japan is in, as it is left behind in the wake of of world-movers like the US and China who change the world that we live in through their decisions and the policies that they make.

It really saddens me that the people who are in charge of energy policy in Japan, and are therefore responsible for the future of Japan, are too small-minded to participate in global debates, content instead with just looking as the rest of the world seeks change.

There is a lot of potential for new enrgineering and technologies within Japan, but so long as they are not utilized and, they will remain as they are, only potential dreams.

The Fukushima Daichi Nuclear Disaster is an accident of proportions that will remain for centuries, yet there appears to be little desire to learn from it, no major movement or indication that a definitive master-plan will be in sight.

It seems we will only be getting more of opportunistic politicians and media belonging to the ‘ruling elites and establishments’, and the researchers who support on-going agenda. Perhaps this is all part of the mindset of a ‘remote and isolated Japan’ ?

It appears that Japan’s energy policy will remain under Regulatory Capture for the foreseeable future. I had requested my publishers to prepare some copies of my book ‘Regulatory Capture’ to sell here just in front  of  the cofenerce hall, but the demand was beyond expectations and the book copies were sold out very quickly (in Japanese) thanks to an eager audience.

He had come to discuss his talk “Resilience and the Unimaginable; Technology and Risk: Lessons from Japan” as part of the Carnegie Council’s centenary program, ‘Ethics for a Connected World’.

By the next morning, at around 10 a.m, he had sent me an email thanking me for our discussion along with with his speech text he was thinking of delivering.

Amazing. His intellectual and social prowess is evident from the way in which he integrated the latest literature and the NAAIC report in his talk, and his firm grasp of the arguments and nuances therein. It is an embodiment of his first-rate education, his career path as an acclaimed author, a competent academic in the field of history, and as a politician. You can find his talk here. Please take a look through it; I am sure it will be worth your time.

A few days later (8th-10th), I was in The Hague to attend the World Dementia Council. On the morning of the 10th, before my flight home, I went to the Mauritshuis Museum. Here I happened to meet David Malone, the Rector of the United Nations University, who used to work for the Canadian foreign ministry and knew Dr. Ignatieff well. He told me that Dr. Ignatieff’s talk was excellent, and that he touched a few times upon the findings of the NAAIC report.

I was heartened to hear this. It really makes your day, these kind of things.